Disclaimer: I have watched lots of tutorial videos and read a lot of articles on post processing and have taken bits and pieces from them to end up with something I like.

Once I have rated and imported all the photos into Lightroom I'll usually follow this process for most of my car photos, I do slightly different things depending on what the subject is but for machinery and mechanical things with lots of detail and structure I like the effect I get with this method.

So to illustrate my method I'll be using this image of a 1963 Aston Martin Lagonda Rapide I captured at the recent Australian Grand Prix.

This is the original image just imported with the default settings, when I shoot the images I usually take into account how I'm going to process them and will sometimes under expose or over expose to get the effect I want later. 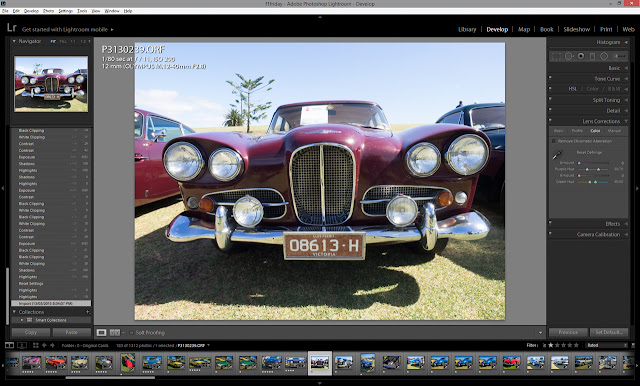 First thing I usually do is adjust the highlights and shadows as shown below, minimum highlights and maximum shadows, that shows as much detail as there is in the RAW file. I like details so I start here. 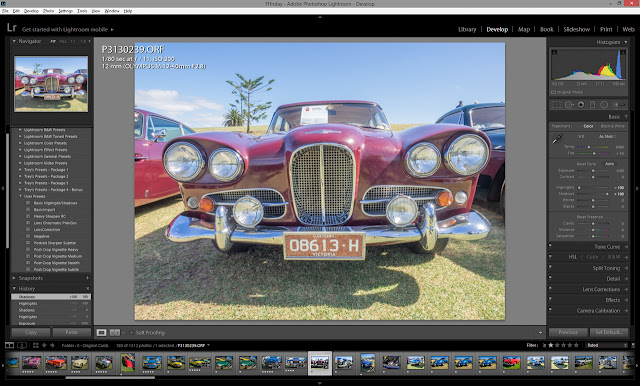 Next is to use the white and the black clipping sliders, to try limit the loss of detail, sometimes you go a little bit further just depending on how you like each image. 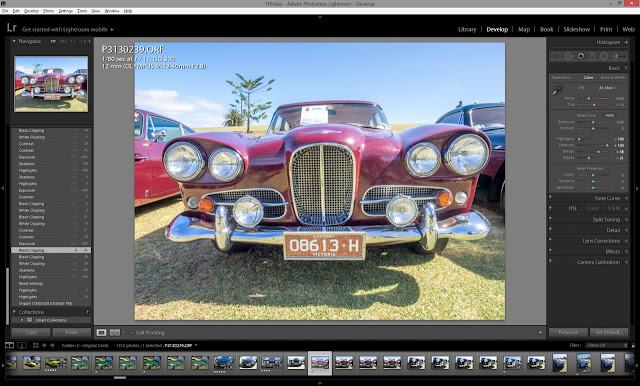 A handy thing is to use the sliders in conjunction with the Alt key on your keyboard while sliding the white slider will show where you are about to loose detail as white spots if you keep pushing the slider in the positive direction. 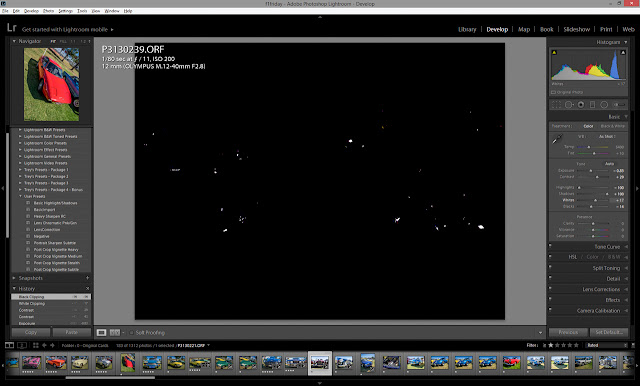 For the black clipping using the Alt key will show you where you will be starting to loose detail in the shadows as you push the slider in the negative direction. 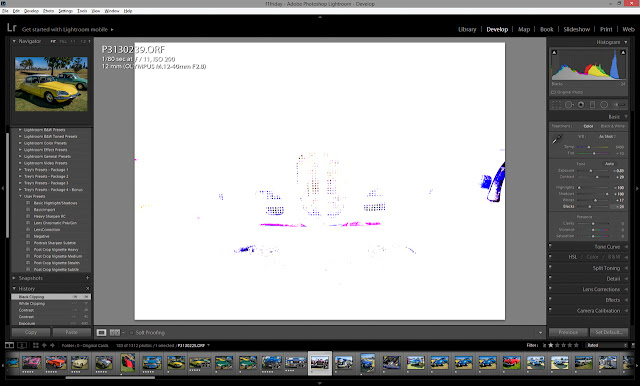 The next step for me is to adjust the Exposure and Contrast until I like it, I can't think of a way to quantify it it's a "vibe" thing. As well as add some Clarity and Vibrance and very rarely a very little saturation. These are great to bring out detail in machines and buildings and the Vibrance just brings out the colour. 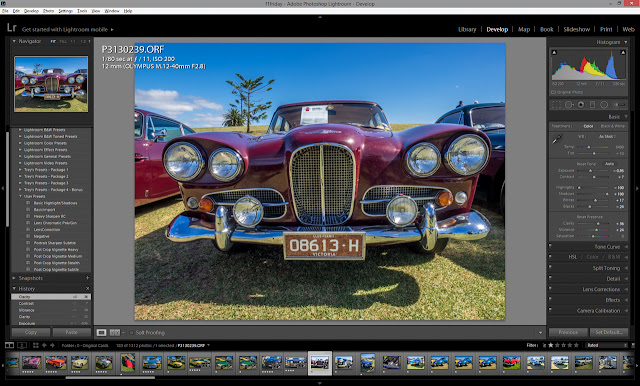 As far as Clarity I think you need to be a little bit conservative with it, when I first discovered it used to use it quite aggressively but you end up with a lot of noise, artifacts and glowing things in your images which look weird (I think). It's up to you to find your level of conservativeness.

As a rule of thumb I usually set the Vibrance to about half of the Clarity and then move it around a little either way but rarely go more then the Clarity (on the slider), but every image is different and your preferences will dictate where you go.

At some point you might have to crop and straighten the image, you preference as to at what point you do this, usually if I have to crop in a lot or rotate the image quite a bit because the initial angle I took it at just didn't work or because I wasn't careful enough taking the image, I'll crop early on in the process as this helps set all the previous parameters more accurately as your not tuning the image for areas that you will be cropping out anyway.

Some people don't like cropping close to the subject but for me it depends on the subject, I think with my images of cars, I'm usually using quite a wide angle that the image will be distorted anyway and the focus is the center of the image it's not as bad, but that's my theory. 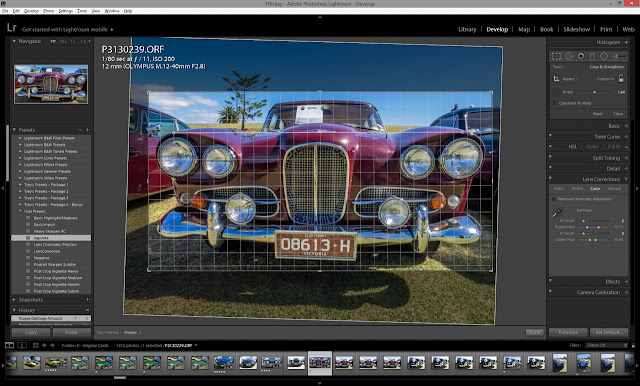 Quite often with cars, structures, machines I'll use the details panel to sharpen up some of the smaller details. Usually I'll push the Sharpening Amount slider to about 70 and see what happens, sometimes more or less depending on how much detail is already in the image, then I'll use the Mask slider in combination with the Alt key to reduce the effect of the sharpening to the higher detailed areas that you really want the detail in. 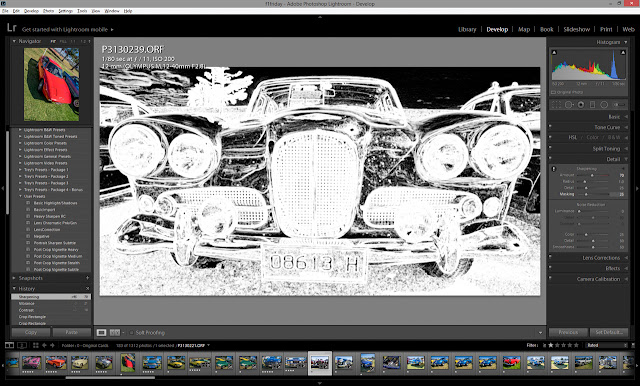 I'll usually toggle the Details on and off with the switch on the details panel in order to get a feel for where the sharpening has occurred, sometimes the extra detail is so subtle it's hard to know where it is as your moving the sliders but when you turn it on and off it's much easier to see it. This image shows the detail tuning off. 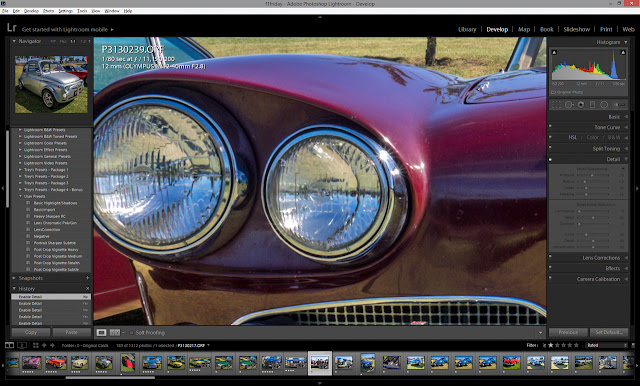 The next image is with the detail tuning turned on, quite noticeable. 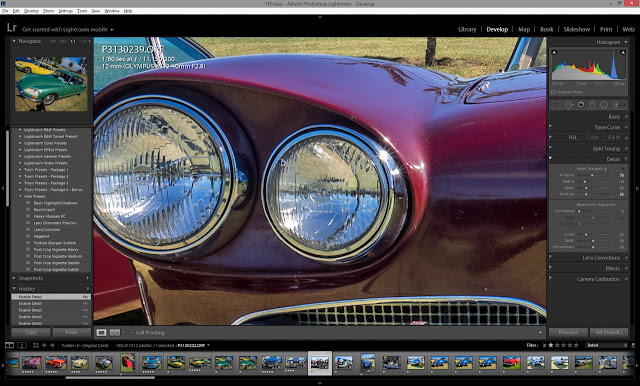 Next I'll usually tweak the Luminance slider a little and try to reduce some of the noise in the image, if you go to far you can end up with something that looks like a pastel drawing or cartoony, but it's your preference again as to how far or not you go. Using the Alt key in conjunction with the Luminance slider will convert the image to black and white which helps see the noise as it's being affected a bit better, zooming in also helps a lot. 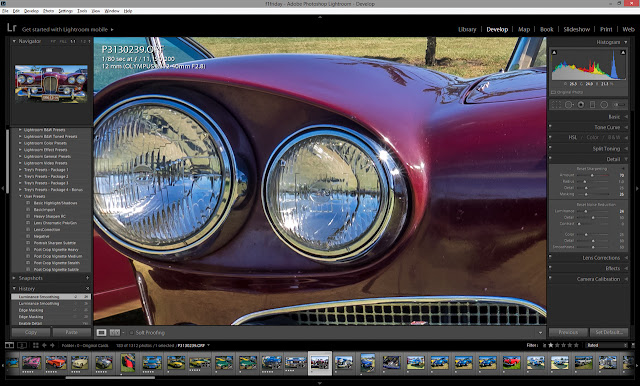 The last step which I usually take is to use the corrections panel to remove/reduce chromatic aberrations. These are normally more apparent when using a fish eye lens which I like to use for car images but in this image I used the Olympus 40mm f2.8 lens and there was really no need to remove any chromatic aberrations. Usually I'll tick the box to enable it then use the green and magenta sliders to reduce the chromatic aberration effect from the image. Chromatic aberration is usually very easy to see around edges where there is a high contrast between objects. Once you see it, you can't un-see it and you have to get rid of it. 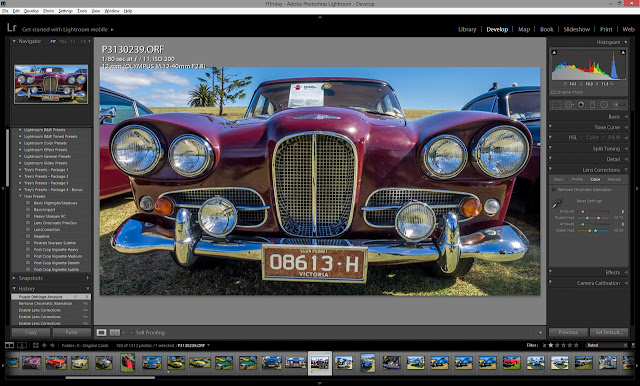 So there it is. This all seems like a lot to do but it's quite quick and simple. As you work out what you like you can also develop your own presets to get you to your starting point at the click of a button then once you import the images you can just apply the appropriate presets and tweak the settings for the individual image.

Hopefully this was helpful for someone and you can take something away, either what to do or what not to do.
Posted by defMondo at 02:41