The B&W Project - Challenge #3 - Tools of the Trade

Tools of the trade the next challenge in the #BWProject26. hmmm, nothing to exciting for someone in IT field. To try and fit in with the goals of using flash and liquids there was only one option throwing water on a keyboard or mouse. The mouse option would probably have been slightly less interesting with less things for the water to splash off.

The next thing was to find a dead keyboard, having thrown out a keyboard which had been ruined by coffee mid last year. I briefly contemplated purchasing a cheap $5 keyboard but it seemed a little wasteful to ruin a brand new keyboard just for a photo so it was lucky that I found a dead keyboard in the office.

So since starting this project I had ordered some cheap soft boxes and some clamping style flash mounts for the soft boxes and all the bits arrived finally in time for this challenge. Everything seemed to fit relatively well together and it's interesting wrestling with the soft boxes trying to assemble them without "incapacitating" myself. But once it's all together it all seems to work as I expected (rightly or wrongly).

So the next major goal was where to setup and how to set it all up so that there would as little permanent damage as possible from the splashing water, so it was to the kitchen and commandeering the kitchen table and the kitchen.

Once things were setup there was a lot of trial an error placing the soft boxes the keyboard and seeing what worked best before any water was stilt. Initially i was trying to get the table as the base for the keyboard but that was just not going to work splashing water all over it and I didn't have anything large enough or photogenic enough to cover the whole table top. I remembered a sheet of clear acrylic plastic lying around waiting to be used in another project non photographic project and I figured it would give a nice reflection to sit the keyboard on that, but being clear it also gave a very clear view of everything under it as well.

While looking at the keyboard sitting on the acrylic I noticed that there would also not be an easy way to crop anything that the acrylic was sitting on so I found some boxes from a recent PC build and used those to prop up the acrylic sheet off the table. Next step was trying to get something with a nice solid color under the acrylic and I found a black cloth which under the acrylic gave a really nice reflective top to work on.

So after about 50 or so test shots moving lights, trying different backgrounds I had established ground zero.
There was no turning back once the water starts flying....

I was shooting tethered using Olympus Capture and didn't want to have the laptop next to the splash down area so I used a wireless mouse to trigger the computer to take the shot. Just when you think you can introduce any more lag into a system you add a wireless mouse.

So pressing the left button on the mouse clicked the button on Olympus Capture which then sent the signal to the camera which also triggered the wireless flashes, yay...

So now the "easy" part, time everything perfectly to get enough water and splashes in the image. about 20 shots later and 5 or 6 glasses of water later I lucked out and got something which I was fairly happy with. There were a few shots with nothing in the frame at all, some with water just entering the frame, some with only a few drips in the air. It's just part of the fun.

Once I was happy with the shot there was the worst part of the job to do, the big cleanup, this is where I was beginning to regret selecting liquid photography to try out ;-). About 45 minutes later it was time to look at Lightroom and see what needed to be tweaked.

Once I'd settled into the Lightroom editing it was relatively easy to process the setup was already fairly monochromatic and thankfully there was only some minor tweaks to do in Lightroom with a hint of the Liquify filter used in Photoshop to straighten out the back of the acrylic as it had sagged a little with all the water on it, and then removing some extraneous droplets that felt out of place.

The result was this.

This is a photo of the setup taken quickly before the cleanup with the phone. There was a soft box on either side of the keyboard one from slightly above, another on the floor behind the table pointing up at the white wall. Not a lot of room but it seemed to work out and even managed not to knock over the camera tethered to the laptop on the kitchen bench just below the bottom of the photo.

hmmmm wonder what the neighbors would think of doing this outdoors at night and setting flashes off every minute or so...

Bring on the next challenge.

Posted by defMondo at 02:14 No comments: 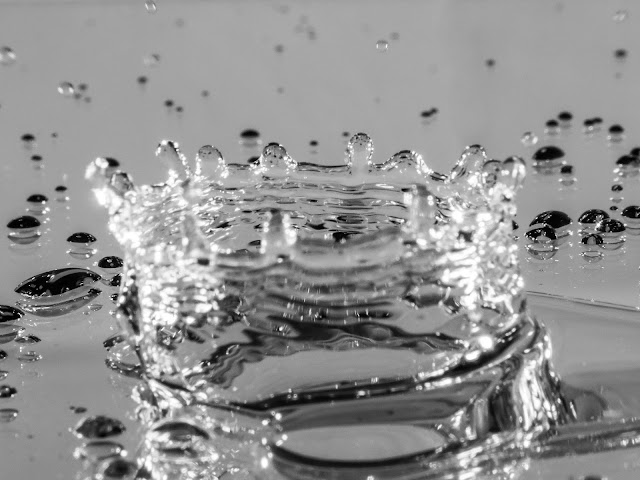 Posted by defMondo at 00:32 No comments:

Earlier this year I decided to give a year long photographic project a go, unlikely to finish it but should be an interesting learning experience. The project is The B&W Project on Google+, the aim is to take 26 photos in Black & White on a theme announced 2 weeks before the due date of the images.
The first theme was "New Beginnings" the aim to post an image which would explain a goal that you could work on during the year long project. I chose the following image: 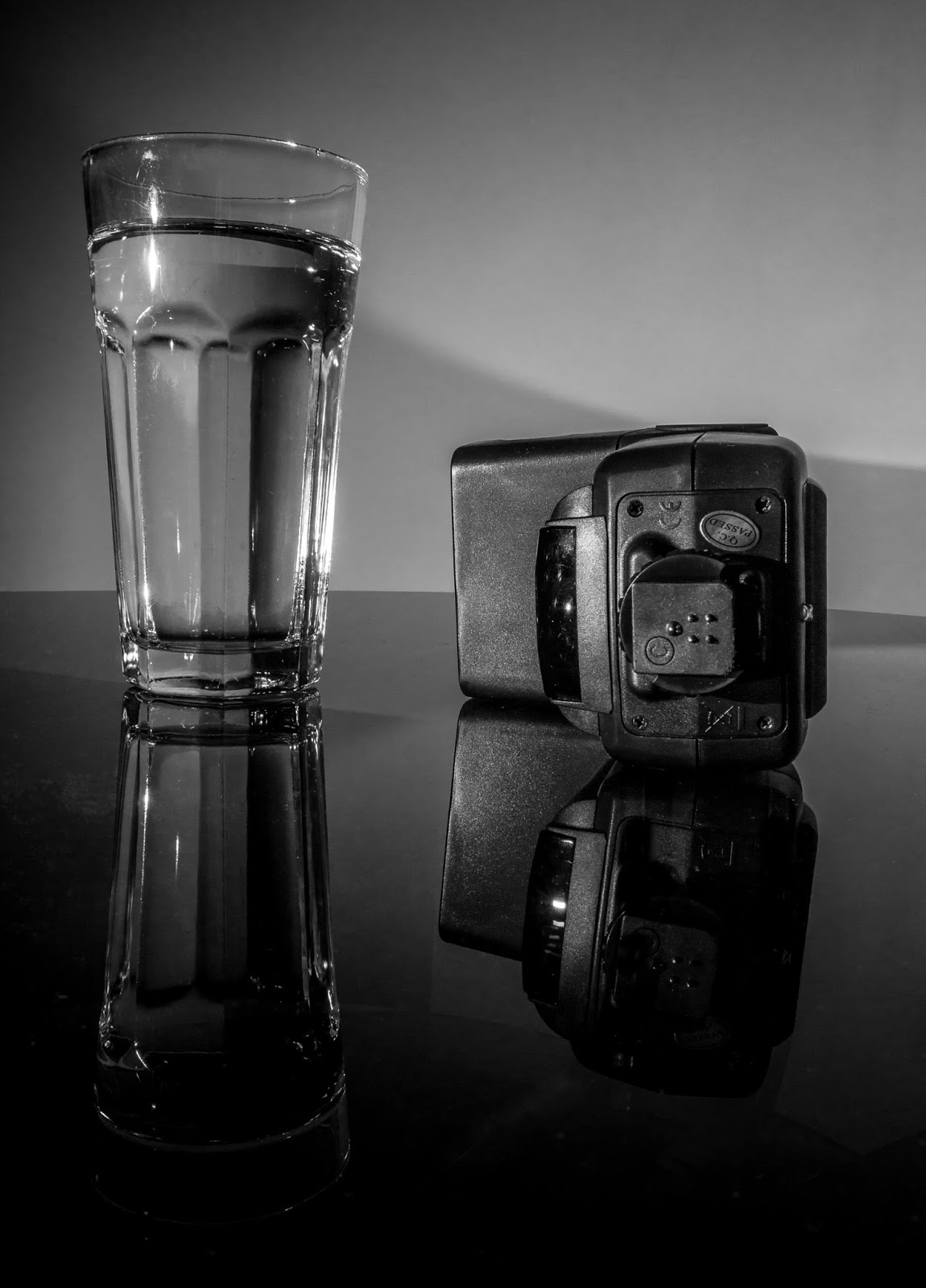 I have always wanted to try liquid, splash, droplet, etc photography, and I have always had an aversion to using flashes or artificial light in photos mainly due to seeing it as a huge, scary, nasty beast. So this was a good opportunity to try a couple of things I had never done and hopefully learn something new. It's much easier to learn something you already know.
Lets see what the second challenge brings and what I manage to get done....
Posted by defMondo at 02:10 No comments: