Beaches here are freaking awesome, nice smooth sand for miles and magnificent weather all the time, lucky there is ozone in the northern hemisphere, much more bearable being out in the sun.

Just been for a tour of the Estadio da Luz (Stadium of Light) the newest Football (Soccer) stadium in Portugal belonging to the only Football club in Portugal worth supporting Benfica. Prety darn impressive (pictures will be up later cant upload them from here).

Now back to the coffee

Posted by defMondo at 02:58 No comments:

Email ThisBlogThis!Share to TwitterShare to FacebookShare to Pinterest
Labels: Travel

These are some of the local inhabitants enjoying a magnificent day out. 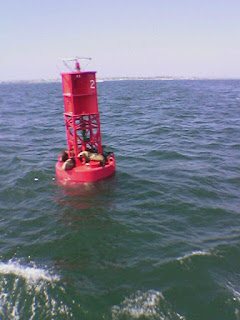 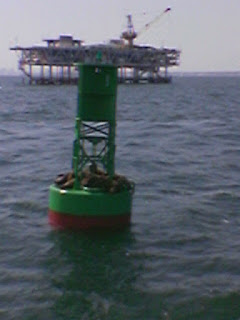 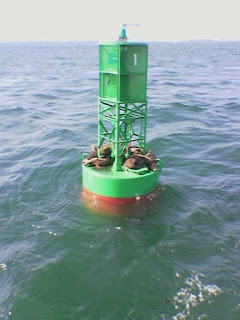 Here are pics from of the Queen Mary and the Sub. 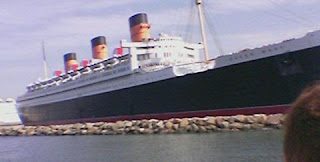 Posted by defMondo at 02:57 No comments: 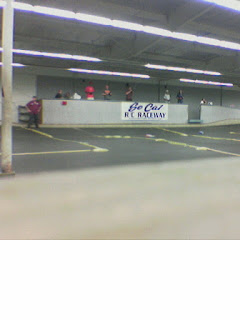 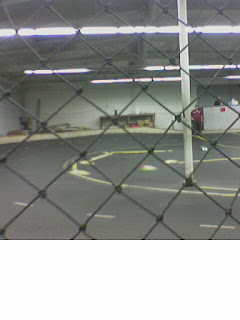 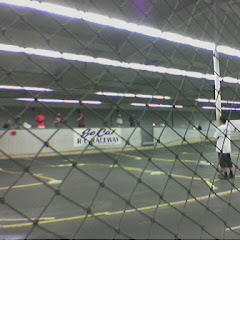 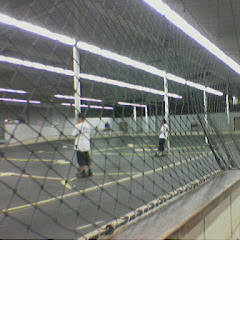 Posted by defMondo at 02:54 No comments:

Email ThisBlogThis!Share to TwitterShare to FacebookShare to Pinterest
Labels: RC

This has to be one of the best races in the world, the organisation was great and the racing in invitational class was even better. Spec and Open mod wasn’t to bad either but Invitational is where it was at.

All 32 invitational races were amazing, the racing action was awesome and I cant wait to get a copy of the DVD’s to watch it all again. The no-one way rule makes for some really close racing and great driving. As someone else said “This is the only R/C race that would be worth televising.”

My race was more uneventful, because of the qualifying method you need to get at least 2 really good clean runs otherwise dont bother, it makes it hard to get a good position. Allthough it does reward consistancy which is a good thing.

I managed to get 2 good runs in but dumped on both, was taken out in another by a randomly moving car and took myself out in another qualifier. Mental note get new batteries before next years race.

The RP30 control tyres weren’t to bad although the general consensus was that they were a single run tyre and it was all downhill after that. The teching worked very well and everything was checked cells, motors (spec class), bodies and tyres.

All in all a great experience and incredible to watch such close racing.
Posted by defMondo at 02:50 No comments:

But there you go, today was the day and it was only a practice day, there are 4 rounds of practice and there are 22 races per round including the invitational, no double entries.

Basically you have a total of 21 * 8 minutes between runs, which is 2 hours and 48 minutes, I though our nationals were bad.

It does give you plenty of time work on your car, drive out and go to Starbucks

or get lunch, plenty of time to look around all though being practice there isn’t much to see. You can also catch up on some sleep or the latest Stephen King novel. Actually there is plenty of time to do all of the above in between each of your races ;-). Saturday and Sunday should be a bit better as the Invitational class is head to head racing from the start so that should be fun.

So far the hottest lap times have been set by Surikarn 13.0 and Marc Reinhard with a 13.1, looking like an interesting race for the weekend.
Posted by defMondo at 02:38 No comments:

There was just so much stuff there it wasn’t funny. Anything RC (air, land or water). 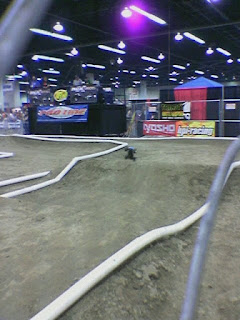 This show is prety much aimed at the consumers and there were at least 6 different demonstration/trial areas. Kyosho had 2 Mini Z tracks to demonstrate their cars an off road and an onroad one which looked like it came straight out of GT4 or Gotham Racer.

There was another section which was an oval track setup with donated cars and was used for the public to play to have a go with the cars, the durface being slick concrete meant that drifting was the go.
The most impressive RC (land) track of all was the full on dirt off road track that was used to demonstrate 1/8th and 1/10th scale buggys and Mini T’s at times. The most impressive part of the track was a massive jumped that launched 1/8th scale cars about 25 feet into the air.

For the air RC enthusiast there was an area set aside to demonstrate helicopters, planes and some prety freeky flying machines.

Exibitors included all the major rc brands, Associated debut what is likely to be their new TC4 Factory team car, Novak showed off their new competition brushless speed controller currently in use at the Reedy Race by a lucky few. Much More where showing off the brand new motor cooler and battery warmers plus their full prodruct range as well.

All in all very impressive, some photos to come soon.
Posted by defMondo at 02:38 No comments:


The weather was great for once at a Vic titles unfortunately no big event ever goes smoothly and this time power didn’t want to do it’s thing. But once geni arrived it was all go.

There was lots of racing and lots of fun, I worked out I need new batteries, the new Reinhard V2 motor with stupidly hard springs really drains my batteries quickly. Com life and brush life is really good though.
Now only 2 weeks to the next big race.

Here are some random pics from the weekend: 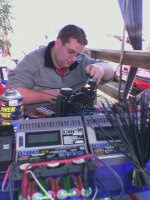 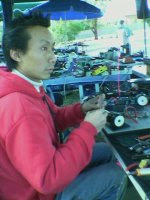 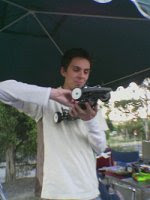 Posted by defMondo at 02:38 No comments: